In the Interest of Transparency

This came across my desk this weekend and I wished to share it with you earlier, however, with the recent rains my satellite internet was not cooperating with me.
I am a supporter of Whitespace in our town and hope that this issue can be resolved.

I will not editorialize. The following is the write up in The Sun, a link to the letter Mr. Engelmann received, an audio of the voice mail message left on his machine, and finally his Letter to the Editor.

Thurman board and ‘white space’ engineer at odds
BY THOM RANDALL
APRIL 20, 2016
3:00 PM
ATHOL — The town of Thurman’s award-winning wireless Internet-access system is working well, but the Thurman town board and the network engineer who designed and installed the town’s “white space” broadcast system are now involved in a contract and payment dispute.
Fred Engelmann of Rainmaker Network Services sent emails this week to subscribers of the white-space system citing that the town had not paid an outstanding bill of his, and it might impact his ability to operate the network.
The bill was for topology redesign of the white-space network for $8,223, according to a letter dated March 14 that he sent to the town board. That sum was in addition to the $38,500 he was paid according to a contract with the town to engineer the system, according to Thurman supervisor Evelyn Wood.
The extra sum was because the network was redesigned in late fall due to a town resident not allowing a pole to be erected on his property, Engelmann said.
Engelmann said that this winter he had doubled an original claim of about $4,100 and billed the town $8,223 after his original lower bill for topology design had not been included in a claim submitted to New York State for reimbursement through a pending $200,000 state grant. He said the redesign work was indeed worth $8,223, but he originally reduced the sum by half and designated the remainder as “in-kind services” to be listed in the state grant claim, with the expectation that he would in return be getting paid to operate the town’s broadcast system.
April 19, Town Supervisor Evelyn Wood said the town board was withholding payment of the additional claim because Engelmann had been paid in full for his work, and that neither she nor the town board had authorized the topology redesign. Even if it was authorized, she added, boosting the bill from $4,100 or so to $8,223 would be improper.
“If you submit an invoice for a particular amount you don’t get to double it later because you feel like it,” she said.
Engelmann said this week he had indeed been paid for the engineering work as specified in his contract with the town, but he also had verbal permission from Wood to conduct the extra re-design work.
“I feel the situation is unjust,” he said.
Wood said she didn’t give him such verbal permission, and that in addition, the board also had some other concerns about whether Engelmann had indeed conducted his work in accordance with the contract. She said that after review of Engelmann’s work and the contract, the town attorney had advised the board not to make the additional payment.
The board met in executive session March 29 to discuss details of the situation, and are continuing their review of the issue, Wood said.
Both parties said they were willing to meet with each other to discuss the situation, claiming the other one was refusing to do so.
“We have offered to meet to discuss his concerns and get them resolved, but Mr. Engelmann has declined to speak with us,” Wood said.
Wood said that Engelmann had recently proposed to meet with the entire board to discuss a resolution, but only with the entire board present — which would violate the open meetings law.
Wood said that the white space system has been operating without any interruption, despite recent Engelmann’s warning letter to subscribers.
There are several new potential subscribers, waiting to obtain equipment and be connected, both Wood and Engelmann said. Wood said they’d likely be connected soon.
Wood added that Engelmann has declined to sign a contract for maintenance and operation of the white-space system, but this is not going to have any effect on residents’ ability to have Internet access in the future.
“Mr. Engelmann chose not to sign that contract. so were just moving along,” she said, noting the town board may decide as soon as April 26 at its next meeting to solicit new bids for the system’s operation.
Town undergoing state audit
In other matters, the town has been undergoing an audit since Aug. 12 with representatives of the state Comptroller’s office reviewing the town’s  purchasing, spending and accounting practices.
The audit is a routine undertaking, as the state conducts audits of all its municipalities and school districts every several years.
The last state audit of Thurman’s finances, examining the years 2007 and 2008, found a large surplus of money stashed in bank accounts, improperly gave $11,800 worth of time off to some employees, and didn’t require its employees to use a time clock. Since that era, the town has an entirely new town board and supervisor.
Since Wood has been in office, she hired a professional bookkeeper to straighten out finances and comply with the law, while her political detractors have complained about the $30,000+ salary he was earning.
Wood said this week she welcomed the new audit.
“We’re excited about having the opportunity to have state auditors come in and look at how we are conducting our finances and make suggestions if they need to,” she said. “We’ve taken a lot of classes and training, and we’re always looking for ways to improve.” 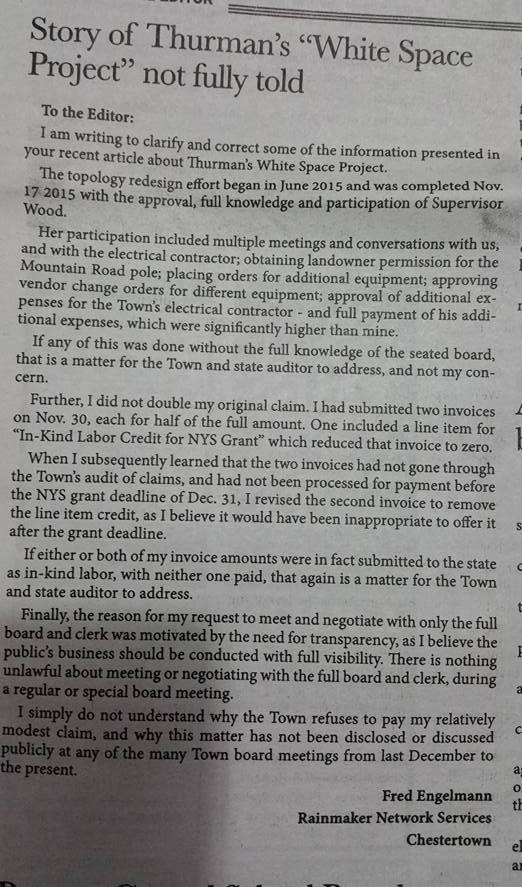